Skip to content
View basket “Disney Infinity 3.0: Gold Edition” has been added to your basket.
-56%

A New Beginning – Final Cut is a cinematic adventure-thriller done graphic novel-style. In this charming and witty adventure, earth is on the brink of impending climate cataclysm. It’s essential to travel the world in order to spare mankind and save the whole from this terrible fate.

Bioengineer Bent Svensson had to resign from researching alternative ways of generating energy. Now the former workaholic lives a secluded life in the remote forests of Norway. His early peaceful retirement is invaded by Fay, a young woman claiming to be a time traveler from the future.

She tries to convince him that she’s here to prevent the climate cataclysm from happening and according to her, Bent’s research is the last hope to achieve just that.

However, his results are on the verge of falling into the hands of a reckless energy tycoon who cares for nothing but his own profit.

Together, Bent and Fay now have to put an end to the imminent global catastrophe.

"A New Beginning gives an amazing impression. It's exciting, smart and persistent. The graphics are a genuine eye-catcher and both protagonists grow into complex personalities the player can easily relate to, even grow fond of."
90/100 - Adventure Corner

"The dialogues, carrying a serious yet sometimes witty tone are one of the game's major strong points. They give both likeable protagonists depth and personality. The writers have paid attention to even the most delicate details."
84/100 - Gamestar

"Blending strongly-defined characters into a stunning and memorable backdrop, A New Beginning is an "eco-thriller" that is not to be missed."
80/100 - Adventure Gamers 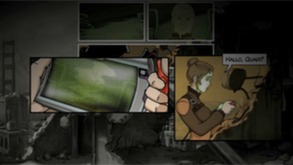